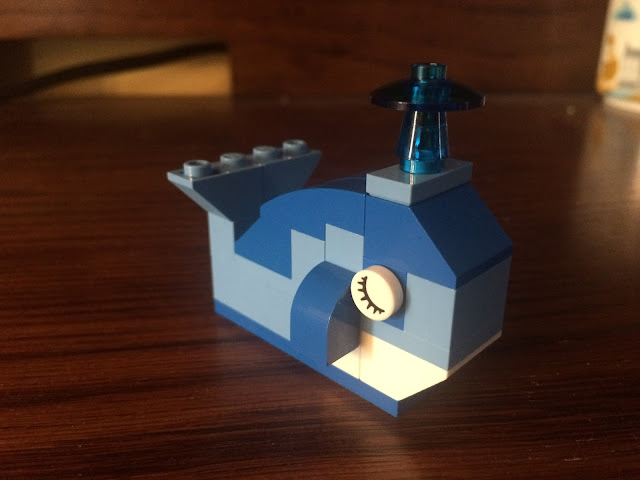 Sam built a blue whale out of Legos yesterday morning.

Reformation 101, in case you need a quick review: Martin Luther, the academic-turned-Augustinian-monk, came to a new understanding of God's grace that led him to take issue with some of the practices of church. So on a late October day in 1517, tradition says that Luther posted a list of 95 things that the church needed to know about its current mishandling and misinterpretation of God's grace and salvation. Luther's theology and voice began a movement of reformation. The hope was that the church would repent and refashion itself. Instead, church and politics and class struggles all intertwined to lead to the splitting of the church.

It is 500 years later. 500 years after the start of the Reformation. 500 is a big number. It is the sort of number that leads people to believe that we need to plan Big Things.

But what is it, exactly, that we are celebrating when we celebrate the Reformation in this or any other anniversary year?

Which leads me back to that blue whale.

Sam has a small starter set of Legos that came in a color-themed box. His is the blue box, which means that the blocks are all blue-toned, and that they give you the correctly-shaped pieces to make three specific figures: a house, a train, or a whale. Maybe someday we'll get him the green box (which includes instructions to make a dragon), or a red box (which includes instructions to make a race-car, among other things).

The catch is that there are not enough pieces in the set to make all three figures all at once. You need to borrow and re-use certain Legos to make each of the figures.

When Sam built his blue whale yesterday morning, he first had to take apart the blue train that he had previously built. He disassembled the train into its component parts. Some of those parts he used for the whale, some parts he didn't. He had to bring in some new parts for the whale that he hadn't needed to use for the train.

I'll admit it. I was positively giddy when I realized that my almost-four-year-old spent the morning of the 500th anniversary of the Reformation taking apart one Lego figure and literally reforming the pieces into a new figure.

Our world has changed a lot in 500 years. There is no way that Martin Luther could have anticipated the rage of questions facing the church in 2017:

These are important questions. And so we cannot leave the work of reformation 500 years in our past.

Because the Reformation isn't about receiving a blue train 500 years ago, applauding our ability to preserve the train for five centuries, and figuring out how to guard the train for the next half-millennium.

The legacy of the Reformation is that we have been handed a blue train and a clear plastic box of blue blocks, and God is asking us to make a blue whale for the sake of the world. We have been given the grace to disassemble and reassemble our faith and our church; the grace to leave some blocks behind, at least for right now, and to incorporate new blocks, which themselves might be set aside down the road when we start thinking that God is calling us to build a little blue house instead.

Do we believe that God still acts in the world, and that grace and forgiveness and resurrection are present and ongoing realities? Do we still understand our faith as a dynamic entity that grows and shifts and changes and transforms as it mediates between God and the world? Do we have courage and humility to open our ears and hearts to blue blocks that speak new truths about God, by the inspiration of the Spirit?

How do I know this to be true? A little whale told me so...